Rye has passed away.

Rye was a fun dog to train and trial on stock. He rated his ducks well, worked wide on his sheep and was easy to train considering I had little stock experience. He never saw cattle except at trials yet had a natural confidence and ability to move them without rodeoing.

Rye was the kind of dog that always did better in trials than training. He would see that I was a little stressed in a competition and notice that I was awfully quiet compared to the usual. If he could talk he would have said ” hey it’s OK, just stand over there and hold on to that pen, I’ve got this”. I noted to myself after getting his WTCH that he did better in Open than started and better in Advanced than open. The further away I am from him, the better he does.

Thanks Rye for being happy to work with me, even though you really didn’t need my help.

Thankyou to Marti Parrish of Justus Aussies for this very special dog.

Rye and Osa with some ribbons 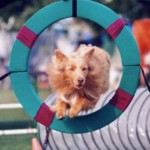 Rye having fun in agility